Fantasy and Science Fiction are Totally the Same Thing, Right?

Let me think about that question a little more.

I write, read, live, love, breathe fantasy. Have for very nearly all of my life, and don't see that changing anytime soon.

Why am I bringing this up? Because I was called a science fiction writer during a meeting at work today. (In a rather derogatory (and inaccurate) context to boot.)* And apparently I've made my views on this subject known to coworkers, friends, and family. Because as I corrected my coworker for making this false statement, so did several of the other people in the meeting.

Then I got back to my desk and my darling friend Taryn asked how the meeting was. 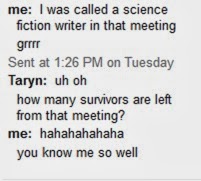 Not long thereafter, my husband asked me the same question.

Any of you ever have someone make a completely wrong statement about what you write/writing in general? Ever have them think you're crazy when you object, because really, they're totally the same thing, right?

*Additional note following a conversation I had about this post with Delia Moran: I would like to go on the record and state that I actually don't mind explaining the difference to people who actually care/simply didn't know/are interested and want to listen. What bothers me is when people think fantasy and science fiction are the same because they're both trash anyway. Just a bunch of useless words lumped together. So why bother differentiating? I must know I write the crappiest of crap, so why would that really matter to me? This is like when people ask me why I don't try writing a "real book." Not acceptable. So once more for the road: grrrrrrr.
Posted by Ashley Turcotte at 2:20 PM