The Power of Storytelling


I realize it's been a while since I've blogged. Sorry about that, guys! But something happened the other day that I just can't stop thinking about, and I wanted to share it with all of you. (I tweeted about it at the time, but I have so much more to say on the subject than can be included in just 140 characters.)

So on the way to work on Monday, I saw a truck for a stairlift company. It had a picture very similar to this one on it: 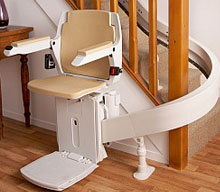 The instant I saw that picture, this is what popped into my head:

The image of Carl scowling while riding his stairlift stayed in my mind for a couple of seconds. But since I was thinking about Up already, my mind very naturally went to my favorite part of the whole movie: the montage of Carl and Ellie's life together. And I seriously burst out crying while driving down the highway. If you've not seen it before, I've put the video below. Or maybe if you have seen it and you love it as much as I do, you'll want to watch it again anyway.


Wow. I just watched the video to make sure the whole thing was there and it was loaded properly, and I was crying my eyes out. *grabs box of tissues.*

So anyway. *sniffles* The point I'm trying to make here is that there is very real power in good storytelling. I seriously saw a picture of a stairlift and, within a matter of about 10 seconds, I was bawling. Because of a picture. Of a freaking stairlift. If I'd never seen the movie Up, would I have reacted this way? Definitely not. I probably wouldn't have more than glanced at the stairlift truck on my way by. But because the image I saw on the side of that truck was associated with something else in my mind, all of a sudden I have an absolute flood of emotions running through me.

This is what truly good storytelling can do to us. (To us, or for us?) It can take the most mundane things and make them really mean something. It can turn an otherwise boring commute into something special (if exceedingly sad).

That's such a large part of why I decided to become a storyteller, guys. I mean, I write books instead of making movies, but I feel that words are every bit as powerful as images if they're used correctly. When one of my CPs told me that my most recent book made her cry, that was pretty much the best compliment I could ever remember getting. The fact that my words made her care so much that she started crying filled me with such happiness. Such pride in the years I spent on my writing to get to the point where I am today.

And I hope that, some day, my writing is good enough where someone will be driving down the highway or walking down the street, see something that reminds them of one of my books, and they'll feel something. Could be they burst into tears (if that's the case, though, I hope they're not driving too fast...safety first, you know), or burst out laughing, or even just smile a little. As long as my words, my places, my characters matter to them, I'm pretty sure I'll have accomplished what I set out to do the first time I put pen to paper.
Posted by Ashley Turcotte at 9:58 AM 1 comment: