Hi all! This is just going to be a quick post. And, umm...it may be my final post until December. More on that in a minute.

First, HAPPY HALLOWEEN!!! I've spent the month of October prepping for this fun and fantastical holiday. For example, I decorated my house with things like sparkly spiders, skull lights, and a Winnie the Pooh Halloween flag. I've also worn Halloween socks every single day this month. Not sure if I've mentioned this before, but I have a great and resounding love for vanity socks. Especially Christmas socks, but those obviously aren't appropriate for October (I do wear them the rest of the year, though).

I never got around to getting a pumpkin this year, alas. I was thinking of carving Jack Skellington, but I guess it'll have to wait for 2013. So I'll just post a picture of my pumpkin from last year, instead. 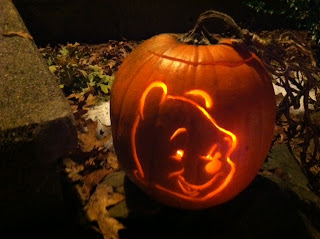 Other pumpkins from past years have included a witch stirring the potion in her cauldron, complete with smokey tendrils, and the epically awesome Darth Vadar. I probably have pictures of these at home, so maybe I'll post them later if I think of it.

Anyway. Back to the main point. Why will I probably not be posting in November? Well, it's the same reason for the title of this post: I've signed up for NaNoWriMo. As I posted way back when I epically failed Camp NaNoWriMo, I went about it all wrong last time. And I very nearly lost my mind. (Only kind of kidding...) But I think that if I pace myself a little better this time, and given the fact that I'll now have Fridays off (Starting this week! Hurray!!!), it might actually work. Also, when I tried to get Twitter and my husband to talk me out of it, it backfired. All responses on Twitter were along the lines of, "Doo eeeet," and here's the gchat conversation I had with my husband:

Husband: I think you should do it, because you have Fridays to yourself to really work on it and your goals, and you're just far enough along that you could realistically finish it during NaNoWriMo. Then obviously you'll have to go back through and edit it, but at least you'll have gotten the plot and major events down...

Me: Grr! You and Twitter aren't helping. I want to be talked out of it, not into it!

Husband:  Okay. You were a wreck last time. And miserable. And hated the quality of work you were producing. And got so fed up you dumped the entire project...and almost turned into a zombie. Seriously...I had to act dumber around you so you didn't think I had a big, tasty brain.

Husband: My plan is obviously working...

So now I have to prove that I can do this without nearly turning into a zombie. And it helps to know that he'll support me completely through the whole process. Even if I go crazy again.

Wish me luck! Also, if you are participating in NaNoWriMo this year, add me as a writing buddy! It'll be awesome to cheer each other on. (I'm NHNovelist.)

Posted by Ashley Turcotte at 12:14 PM